Over the past 10 years, the Abbey Museum has been campaigning to raise money for the conservation of the historical stained glass in the Abbey Church.  In total there are 48 windows that needed attention due to deteriorating lead work (the strips of lead that hold the small pieces of glass together) cracks in the glass or buckling. In total $163,000 needed to be raised. To some that may not be considered a lot of money, but to a small organisation it seemed a huge task.

But with the support of many generous donors who sponsored individual windows, fundraising activities and special grants we have nearly achieved our goal. On Monday 21st March, four of the final seven panels were removed for conservation by stained glass specialists Gerry Cummins and Jill Stehn.  These included two pre-Raphaelite panels depicting St Hilda and Mary Magdalene and two panels of medieval fragments, one which included a shield from Lincolns Inn in London, a German coat of arms panel,  and the other a sun image. 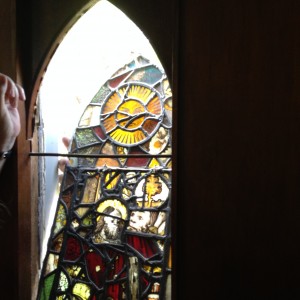 Stained Glass in the Abbey Church being removed for conservation

Stained glass in churches had its origins in the early Middle Ages. Not only were they used as sources of light into the otherwise dark buildings, they were also used educate the otherwise illiterate populous. Stained glass is the only medium that requires transmitted light in order to be appreciated.  It readily became identified with the light of God.   Our St Hilda panel, although much later in date, follows the medieval tradition of using symbols to identify the individual depicted. St Hilda holds a crosier which indicates she was an abbess of a religious community. She also holds a representation of her abbey at Whitby, in north eastern England.  Finally there is a small shield at the bottom that includes what looks like three curled up snakes. In a similar vein to the legend of St Patrick chasing all the snakes out of Ireland, St Hilda was supposed to have turned the snakes in Whitby to stone.  What is remarkable about this is that the cliffs around Whitby are well known as a source of fossilised ammonites, which look like curled snakes turned to stone. 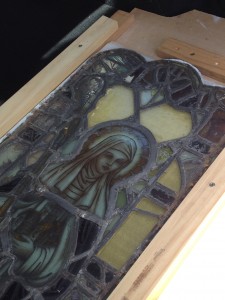 Other symbols used in the stained glass windows in the Abbey Church depicting saints includes a palm leaf, representative of an individual who was martyred – the palm of victory; St Cecilia considered to be the patron saint of musicians holds a very early pipe organ; and then there is St Catherine who holds a wheel. Legend tells us St Catherine, who came from Alexandria in Egypt was tortured on a wheel. Incidentally, the Catherine wheel, popular in any fireworks display was named after the St Catherine tradition.

These windows and many others can be seen in the Abbey Church. The Abbey Museum staff take guided tours  each Tuesday and Thursday at 11.00 am. Why not visit to see this amazing heritage in stained glass. Michael Strong is giving a talk on the stained glass heritage on a Sunday in late May.  Watch this space for details or follow us on Facebook.

Yesterday is gone. Tomorrow has not yet come. We have only today. Let us begin. Mother Teresa