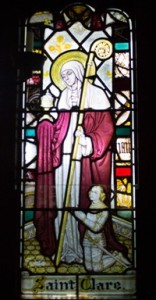 In our Church on the Northern side there is a panel of stained glass of St Clare pictured on the right This window was conserved to commemorate Reverend Mother’s 90th Birthday, in 2012.   Reverend Mother had a special devotion to St Clare.

During St. Clare’s life, it was said that the power of Clare’s prayer was credited with saving Assisi on two occasions. The first involved Clare raising the Host up in a window, thereby causing Frederick II’s invading troops to fall back. Our stain glass window depicts this incident.

When Clare was 18, Francis of Assisi came to preach in Assisi. Inspired by his words, Clare asked Francis to help her in dedicating her life to God. She took vows on March 20, 1212, marking the beginning of the Second Order of St. Francis.

Clare became the Abbess of San Damiano in 1216, and, while spending her days doing manual labour and praying, she began dedicating much of her time to changing the governing rule (established by the Pope) of the Order from the Benedictine spirit to one of the newly established Franciscan rule. (10 years after Clare’s death the order would be renamed the Order of Saint Clare.)

If you would like to support the ongoing conservation project of our stained glass windows please donate now.

Yesterday is gone. Tomorrow has not yet come. We have only today. Let us begin. Mother Teresa